Showing posts from November, 2009
Show all

"The Blind Side" review

November 23, 2009
Julie and I went to see "The Blind Side" Friday afternoon. We got there late, the theater was full and we had to sit waaaaaayyyyy to close to the screen for my comfort, but the movie is fabulous. (actually, we had to wade through miles of "Twilight: New Moon" fans - what's the deal with that movie / series? It turns even grown people into morons!) "The Blind Side" tells some of the story of Michael Oher, currently the left tackle for the Baltimore Ravens football team. While Michael is doing well now, such was not always the case. In fact, were it not for the intervention of Sean and Leigh Anne Tuohy, the story of Michael might be one of a life cut short, were it to be told at all. Michael's mother and father were absentee and, although a ward of the state, Michael was largely homeless. Through the intervention of a friend, Michael found himself enrolled at Briarcrest Christian Academy in Memphis. With a less than stellar academic record
Post a Comment
Read more

November 23, 2009
- Welcome to Stefanie Robison, our newest CBC family member! We're so pleased to have Stefanie join us yesterday through her profession of faith in Christ! We'll baptize her in the next few weeks. In the meantime, do what you do best CBC - make her feel at home. - What a turnout for the Thanksgiving celebration last night! To those who thought they could bribe Steve Edwards into calling your table next, apparently, your offer wasn't as good as someone else's offer! :-) - I got a forwarded note from our friends in Germany, listening to us (via the internet) from their side of the Atlantic! Thanks for the encouraging words and kindness! - It's Thanksgiving week, so that means no Wednesday activities and an unusual schedule for most everyone this week. Before you sit down to your meal on Thursday, spend some time with the Lord thanking him for the last year. While not everything in the past year is necessarily good, the very fact you're here to be concerned
Post a Comment
Read more

Reflections for the week

November 21, 2009
We're home - finally. It's been a busy week! We left Sunday night for Houston for the annual meeting of the Baptist General Convention of Texas. Our church contributes a significant portion of our annual budgetary receipts to the BGCT so for us it was a stewardship move. We listened, we voted, we fellowshipped with other pastors. A few gripes, but mostly they were about the hotel and the city instead of the convention itself. For example, when I stay at a Motel 6, I get free parking and wi-fi. They usually even throw in a free breakfast as well. The Hyatt Regency downtown charges for all of those things at ridiculous rates. Let's just say I won't be wasting time or money with them again. Enough gripes. As for the convention, it was a great reminder of the partnership we're in with the other churches belonging to the Baptist General Convention. You may not know it, but there are more than 5,000 member churches scattered across the state of Texas. Not onl
Post a Comment
Read more

Wow. I'm a little behind on this one, but here you go

November 13, 2009
So I'm catching up on some of my favorite blogs this evening since Julie is on a "girls night out" and I find this video about a church in North Carolina that held a book burning. At first, I thought there was nothing new there. What shocked me was what books they were burning. Remember when I discussed with you that I wanted us to be known more for what we are FOR than what we're against? The church in North Carolina disagrees. Have you ever heard of the Dean Burgon Society? Those who subscribe to his thought believe that ANY Bible other than the King James Version is evil and should be destroyed. The aforementioned church in NC is one of those. Not only that, they took a step further, deciding for God who's works are evil and deserving of destruction as well. I don't know whether to be: (1) Shocked such a group still exists (2) saddened by the irony of their judgmental actions and their name - "Amazing Grace Baptist Church" or (3) Offende
Post a Comment
Read more

November 12, 2009
- If you've ever been curious about how the Bible was made and what it means when people talk about "manuscripts", today is your day! The good people in Muenster, Germany who oversee the collection and distribution of the Greek New Testament manuscripts have been kind enough to place much of it online in high-quality digital images for your perusal. Click here to go see it! While the site is in German, it's not hard to figure out where to go. WARNING : It doesn't work with Internet Explorer. They're Apple / Mac people. They optimized it for Firefox or Safari. Even still, it's well worth your time and effort to go see it! - This weekend we'll be holding a garage sale to raise funds for our mission trip to Germany next summer. Find us at Linda Acker's house. Call the church office for specific directions. Our hope is to defray enough costs to where we can take a group of 25. Never been on a mission trip? You're in luck! We're do
Post a Comment
Read more

November 10, 2009
This Sunday is a rare occasion - we'll start the service with Baptism and end it with the Lord's Supper. I LOVE it when that happens! We didn't necessarily plan it that way but clearly the Lord did! Our message this week, "Remember", hopes to give you a reminder of what these two remembrances are about. As for this video clip, you've probably seen it before, but it's worth another look if only to hear the congregation laughing!
2 comments
Read more

A movie worth seeing

November 04, 2009
I don't make it a habit to recommend movies. Most of them are worthless dribble, harldy worth the time it takes to make them, much less worth my time to waste watching them. That said, there are exceptions. Like this one. I've not seen the movie, but I know the story. Maybe you do too. If not, here's a link to a brief bio . Don't like to read? Check this clip out on his life and you'll understand my recommendation to see this movie.
Post a Comment
Read more 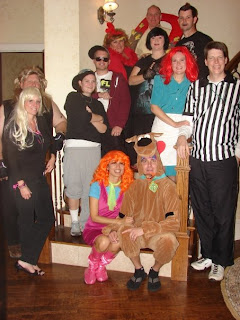 - What a day we had yesterday! WOW! I've never been more proud to be a pastor. From Erica's song to the choir special, I was blown away. I really (honestly!) consider shutting it down after the music. Yet the message I brought had been burning in my heart all week - I knew the Lord had it in mind for someone. I know our church isn't for everyone, but days like yesterday make that hard to remember! If you weren't here, drop a request to our church office and we'll get you a DVD of the service. - This will be the last week of our "I LOVE MY CHURCH" series. I don't when I've enjoyed a series more than this one. If we are to reach Jacksonville for Christ, our love for Christ will be evidenced by our love for each other and our community. Pray with me toward that end! - Welcome Ben Hooper, our newest CBC member! I've known Ben since he was in high school. His dad was a pastor in Hubbard, TX near where I was pastoring in Corsicana. Be
Post a Comment
Read more
More posts