Showing posts from October, 2011
Show all

An Ode to the Rangers 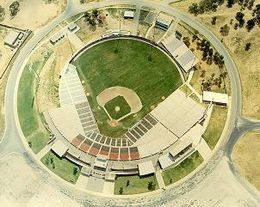 As I'm writing this, the Cardinals have just beaten my beloved Rangers. While I'm heart-sick about losing for the second consecutive year, after a lifetime of waiting to get to the Series, the pain of the moment won't overwhelm the perspective time will bring. Last year, we got horse-whipped in the Series. This year, we had it down to the last strike before the whole thing went to pot. Perhaps by writing about some happier times, I'll be able to temper my disappointment. May 1974 - I had just turned 6 yrs old. My mom got tickets for our family to go to the old-school Arlington Stadium (that's it). I'd never seen such a site! They were playing the much-hated Yankees. We had great seats and I'll admit it - I was hooked. From then on, most every year my parents took me at (or near) my birthday to see the Rangers play. Year after year, spring training would come and, with high hopes, we'd eagerly look forward to getting to the playoffs - much less
1 comment
Read more

An investment in the future

October 12, 2011
This week @ CBC, we're talking about Generosity. What that means and people who we known who are generous. It brought to mind one of the most generous men I've ever had the privilege to know. When I graduated from Dallas Baptist University in 1990, I received a scholarship to attend Southwestern Seminary in Ft. Worth. (Truth be told, I was third in line to receive it. The only reason it came to me was the other two turned it down to pursue other options). The scholarship was awesome and a blessing beyond measure, but it only covered tuition. I still had to live, eat, buy my books and gas to get back and forth. Knowing my penchant for eating (a frequent habit of mine!), I found work through a friend at Sears, right down the street from Southwestern Seminary. Although the store has since closed due to a declining clientele and neighborhood, I learned much about generosity and investment in the future in my 5 years there. Most significantly, I learned how to be generous e
Post a Comment
Read more

The craziest year of our lives

October 10, 2011
I've just reviewed my last blog post. I'll tell you the truth - I'm not in the least surprised by the date - March 28, 2011. Significance? That date is B.J. - before Joshua. He was born on April 11. I couldn't speak to that here since the case was pending and in the six months since then, we've been a little busy. A brief run-down for those who I don't get to see often. March 9 - We got the call about a baby who needed a home. Although it wasn't settled, we were one of six couples being considered. March 23 - We were officially approved as the adoptive couple for an unknown gender child. April 8 - We were informed that the birthmom was to be induced on April 11 and we needed to be there. April 10 - A Sunday. After the AM services, we told only a bare minimum of people and left to get our child. We went with an empty car seat, empty arms and expectant hearts. Truly, our lives were about to change. April 11 - 11:25 AM - Joshua David Wood was born!
Post a Comment
Read more
More posts