Forgive the day error for the several days on my dating - I lost a day somewhere last week and didn't have to find it till today! 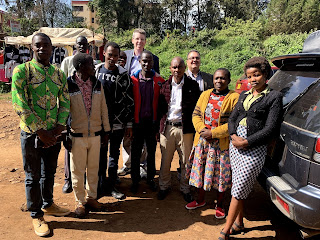 It’s been a long, rich and fruitful day!  After a wonderful and strong devotional led by Caleb Anderson and his dad Carl at 6:45 AM, Lazaro, Baraka and myself left for the college.  It was about an hour and half ride to get there.  On the way out, we saw a few warthogs and a few baboons.  Still a shocking site to my eyes.  We were supposed to start at a given time – 9 I think – and it was clear we weren’t going to make it on time.  Baraka asked me what time class was supposed to begin.  I told him, “When I get there!”  We all had a good laugh and went on.
The class, as it had been, was exceptional.  Don't mind the looks on their faces in the picture - they were happy to be there and we had a lot of fun working together.  They were eager students and had questions far beyond their training.  I was blessed by the time I spent there with them.  Far too soon, it was over.  After taking pictures with them and hugging them all at least twice, we were headed back.  Before we left, however, one of the Maasai brothers gave me a braclet with the letters “PST” – Baraka told me that’s an abbreviation for Pastor.  I was moved by his kindness and generosity.

Little did we know how much awaited us.  When we got back, day camp had just ended and they were preparing for supper.  No sooner had I gotten out the car than Bishop said, “Darin!  You made it in time for the presentation!”  We went to the chapel where the students had prepared a presentation for us.  The Maasai children, in full traditional attire, spent the next 20 minutes performing traditional dances and songs.  I’ve never seen anything so wonderful.  It was beautiful!  The passion with which they sang and performed was inspiring.

Afterwards, I met with Landon Merritt about the construction work.  It was clear they had been busy.  The modesty panels for the bathroom doors – a project that was not on our list – was their top priority.  Fortunately, I had told Landon and Shannon shortly after they arrived that we should expect the unexpected and plan to be surprised.  Landon said, “I was ready when they surprised us because my pastor had prepared me!”  We both laughed out loud!  The other projects – the desks, the benches and the chicken house – saw progress today as well.

At supper, the students invited me to be there speaker for their night devotional at 9 PM.  I was humbled.  This is a kids devotional – they lead it, not the adults.  For them to invite me was a rare honor and I saw it as such.  I spoke on John 9 for about 5 minutes – Made for God’s glory!  I hope they’ll believe that about themselves.

Now, its bedtime.  Tomorrow, Bishop, Lazaro and I will leave for a place north of Subukia where the pastor’s conference will be held.  It’s about 4 hours one way so we’ll be staying the night.  Bless us with protection and safety my Lord!

July 06, 2019
I'm home and it's Saturday morning.  I woke up - no surprises here - at 4 AM.  Jet lag takes a couple of days to dissipate.   So this is where I'll end my travelogue.  Already I'm back to regular pastor life.  I'd been in the house about 20 minutes when I got a call that one of our deacons had lost his father-in-law.  I left for the hospital immediately.  I knew my associate pastor could handle it, but that's not a job I wanted to give away.  Later today (I hope), I'll post some pictures from our adventure.  Thanks for reading this nonsense and for walking with me along this path.  The good news is our adventures don't end just because we're home.  My prayer for this moment in time is that I'll recognize the power of THIS moment as I did while I was traveling.
Read more

July 04, 2019
We left early – 6:45 AM – to make our way to Karuga.   It means “he jumps.”   It used to be close to Thompson Falls.   The falls are still there but they’ve been renamed with a Swahili name.   The event was supposed to begin at 11.   It took us till 11:15 to get there.   We stopped only once – a quick potty stop.   The crazy thing is it’s only about 150 miles.   It Texas, we’d cover than in just over two hours.   But they have no interstate system and they have no means to build one now.   There are speed HUMPS not bumps, in every community to slow traffic.   Everytime traffic slows, here come the hawkers.   Water, fruit, chipatie (Kenyan tortillas), cookies, potato chips, SHOES – I’ve seen it all being hawked by the roadside with people running up to your window with them.   Esp if they see a white face.   I’ve never been ashamed of being white – it’s how God made me after all – but it’s no asset here for trying to be incognito.   Once we arrived, the conferenc
Read more

July 06, 2019
It’s sunrise now and I’m sitting on the tarmac at Dublin International, awaiting them to complete refueling and cabin crew swaps.   It was a good flight up from Addis.   The ride was smooth and I slept about 5 hours – that’s pretty good for sleeping on a plane!   But we still have a long day ahead.   According to the map, we’re still some 3400 miles from DC.   It’s later now – at home, it’s 2:35 AM.   In 13 hours – I hope – I’ll be home.   My bed.   Fresh clothes.   My couch.   My TV.   Plenty of hot water and wifi.   I’m excited but this is a strange feeling – almost like culture shock coming home.   I’ve gotten so used to carefully managing my data usage (I was only allotted a certain amount for the trip) that I was an absolute miser with it.   Thus, I didn’t use my phone except for my Bible app and my journal.   When I could get Wifi, I called Julie and Josh.   I know – when I get home – there will be no such restrictions.   And yet, I don’t really know that I
Read more